According to the Bible, the first temple of the Israelites was built by Solomon around 3000 years ago in 957 BC. The Temple Mount is the holiest site in Judaism, the third holiest site in Islam and also has high importance in Christianity. From the Christian siege of Jerusalem in 1099 to the defeat in the Battle of Hattin in 1187, the Temple Mount belonged to the Crusaders. The Templer headquarters were located within the Al-Aqsa Mosque. Today'y structure was built by Saladin and his successors after the re-conquest in 1187. 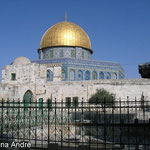 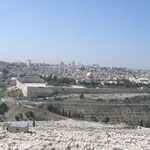 The port town of Acre is located on a peninsula in the northern Bay of Haifa. The oldest settlement was built in the Bronze Age. On 26th May 1104, the old fortress was sieged by the Christian Crusaders. Afterwards, the town was fortified with further walls and towers by King Baldwin the First. The harbor of Acre was guarded by a watchtower which is now known as the "Tower of Flies". On 28th May 1291, the city walls were overcome by Mameluke armies commanded by Al-Ashraf Khalil. At this time, Acre had a population of about 40,000 and was therefore the largest and wealthiest city controlled by the Crusaders.