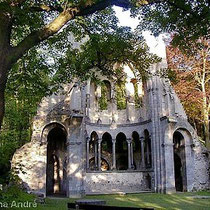 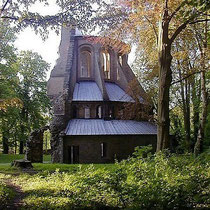 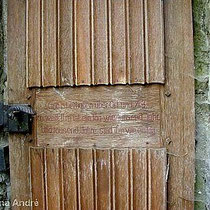 Heisterbach is a former abbey of the Cistercian Order in the Siebengebirge (Seven Mountains) near Bonn, Germany. The ruin is located in the Heisterbach Valley between Oberdollendorf and Heisterbachrott.

The Cistercian Order was founded in 1098 as a reform movement among Benedictine monks. The order was in it's prime under Bernhard of Clairvaux (born 1090 in Fontaine-lès-Dijon, died 1153 in Clairvaux, France).

The abbey was founded after Cologne Archbishop Phillip I. of Heinsberg ordered twelve monks of the Himmerod Abbey to create a sister abbey in the Siebengebirge.

On 22th March 1189 they first moved into the abandoned buildings of the Order of St. Augustine on the Petersberg mountain. In 1192 the Cistercian monks moved to the valley at the bottom of the Petersberg and founded Heisterbach Abbey.

It would take until 1202 until the move to Heisterbach, also called the Valley of St. Peter was completed and the foundations of the new abbey were laid.